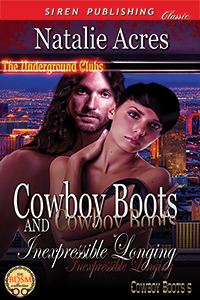 His pain is far greater than his need for love

Master Drew Remington knows pain. He understands its fury. He has walked through its unrelenting terror and remembers the torment in his brother’s eyes as he lay dying in front of him.

His affliction is too vast to overcome

Oh yes, Master Drew knows heartache. He watched as his father was gunned down by a hired assassin. He understands what it’s like to feel helpless and utterly consumed by a harrowing tragedy that left his family in ruins.

A former lover, Suzy Matthews reenters Master Drew’s life. Suzy is determined to win her Master’s heart, but as she plans to embrace the love she and Master Drew share, an emerging war finally erupts. Soon, Suzy is used as a pawn in a very dangerous game set to unfold between old enemies looking to settle one final score.

Available from: http://www.bookstrand.com/natalie-acres
******** EXCERPT ********
“He’s got her,” Drew said.
“No shit.” Crue’s voice filled his ears. “Gabe and I have clear shots in the guest room. We can take out all but one of his men. Looks like Esparza’s son is standing at his twelve o’clock.”
“Don’t take those shots,” Drew whispered, easing closer to Esparza and Suzy. He couldn’t risk a complication. Suzy’s life was on the line.
“Damn it, Drew. If we don’t take them out, you won’t stand a chance when they scatter,” Gabe snapped.
“Then I won’t stand a chance.” He tucked his weapon at his waist and walked down the hallway with his hands in the air. This was like déjà vu, only worse. Suzy was on the floor. Esparza’s gun was aimed at her head. Damn if he didn’t know how that felt. He’d been there. He’d done that.
Damn man must’ve liked reliving moments in life. As Drew locked gazes with Esparza, he reminded himself of where he’d been, what heartache he’d suffered, all at the hands of a monster.
This despicable devil had been at the root of all his problems. He’d taken away the heart and soul of his family. He’d killed his father and slaughtered his brother. Now, he had his woman!
He’d be damned if he’d let him take one more person he cared about. And he wasn’t about to lose his life to Esparza so another one of his brothers would face off with him in the future.
It was time to end this. The moment had come. It was time to send a devil back to hell.
“What have we here?” Esparza cocked the gun.
“You’ll never get away with this,” Drew told him, glancing at Suzy. “We have the place surrounded.”
“Really?” Esparza threw his head back and laughed. “My property is twenty-five acres and your team—your team of six or seven men—have my place surrounded?”
“Your surveillance must’ve failed you somewhere, Esparza. We’ve pulled divisions from across the country.” Drew crept forward as he spoke. “I don’t foresee any way out of this for you.”
Esparza sneered. “I don’t see any positive outcome for your girl. Do you?”
Drew flinched. “I still can’t figure out why you have her. She’s been in town for two days and you think there’s some sort of lasting connection between us?”
Suzy shot him a quick glance. He wanted to run to her as soon as he implied she wasn’t important to him. He needed to wrap his arms around her and reassure her.
Again, Esparza tossed his head back. “You’re living in Vegas now. Haven’t you learned the laws of the land, yet? You can bluff a skilled player, a player who cares about the end result more than the temporary win. But you cannot—or at least you shouldn’t—bluff a true gambler. These individuals will go all-in without considering the risks.”
“Let her go,” Drew said, still holding his hands high. Manny was behind him now. Drew had worked with him long enough to feel him like a second skin. Scott was positioned at the other end of the hall. There was a little red dot on the side of Esparza’s head.
“Do you remember the time we spent together in Virginia, Drew?” Esparza grinned. “Of course you do. I’m the reason behind that drive you have now. When you rise every morning, I’m the only excuse you have to get out of bed. I’m your inspiration when you pound the pavement for four or five miles every day, and I’m—me, Drew, and no one else—the very reason you’ll never know a peaceful rest when you lay down at night and go to sleep.”
“You’re fucking insane.”
“And I speak the truth,” Esparza said. “We share a history that can never been separated. Don’t you feel it, Drew? I do. We’re linked together by what I now consider a very beautiful past, one wrought with murder and deceit, fraud and manipulation. Death surrounds us. Your father took away my family. I’ve slowly killed off yours. We meet, separate, and reunite again. We are so much a part of one another’s lives now that we’re almost family.”
Esparza yanked Suzy’s head back. “When families play together, darling, they stay together. You understand that. Don’t you?”

Posted by lindsey hutchison @ United By Books at 12:01 AM