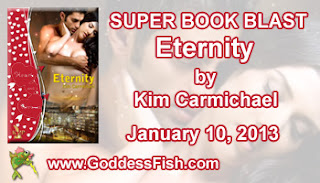 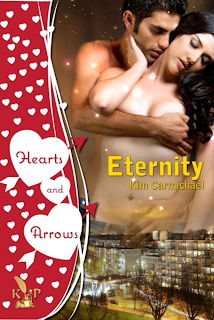 After centuries of pining away for a love never realized, Therin's last assignment as a Cupid depends on helping the lonely, shy Lucy Carlton.  The mission's success or failure will determine where he is transferred.  He can study the heavens or be condemned to hell.

Lucy Carlton spent her life searching the stars for answers, but finds them in the form of a gorgeous man who comes in her dreams.  Therin shows her the joys of physical pleasure and encourages her to try to find love.  She wakes with a new found confidence, but soon her timid nature takes over and she retreats back to the comfort of her home…alone.

With only a week to decide his fate, Therin breaks every rule.  What starts as a job to save himself, becomes a love that can never be…except maybe in eternity

"What makes her so special?" He snatched the crystal away and peered inside.

He sat back, clearing his mind to allow the vision to take over. A woman lay on an unimpressive bed in an equally bland bedroom.

She appeared to be sleeping, but squirmed restlessly. In the few moments he observed, she twisted and writhed as if trying to find a comfortable position.  He couldn’t make out much of her. A think blanket covered her body and she turned her face into her pillow much as he had done earlier.

He was ready to throw the crystal into oblivion, but she thrashed about once more, this time turning over and the covering fell off.

Instead of tossing the crystal, he held it closer.

The naked human's body rivaled any of the immortals, even those of the goddesses. Luscious but lithe, she was a bounty one could spend hours exploring. Her long brown hair tumbled down, almost hitting the floor, and her face dainty, sweet, could have been on a sculpture.

"I see no problem here." Any human or immortal would be pleased to have what was presented to him. His breath hitched as his body stirred. It had been far too long since he indulged.

"Those on earth don't have the same reaction to her you do. She's an outcast and needs you." Horatio moved closer.

"Go on." He didn't take his focus off the image.

"She needs love, but it eludes her. Wants desire, but can't attain it." Horatio's voice became low, scholarly. "She craves satisfaction, but is left wanting."

Therin glanced at him. "What do you mean?"

"You need no explanation. Your mission is clear." Horatio stood. "You have a week to help her. If you are as good as you claim, it's all you will need. Upon your success you will be given your new assignment."

"Wait." He looked up. After eons of demanding to be set free from his position, the gods were smiling upon him.

He peered into the crystal once more. The woman's disturbed sleep continued, misery radiating from her.

"Either way, this is your last job. Your passion is gone and you have broken the rules too many times. It's your choice where you go." Horatio stopped. "She is dreaming now, the timing is perfect."

He clutched the crystal in his fist. Eternal damnation or eternal salvation. As was their way, he would go to her while she slept. She would think he was part of her dreams…or in his case, nightmares. "Horatio."

The old man took a breath. "Don't fall in love, remember what you truly are."

"I'm a Facilitator." He tilted his head.

Horatio shook his head. "A new title doesn’t change what you are."

Kim Carmichael began writing eight years ago when her need for graphic sex scenes and love of happy endings inspired her to create her own.  She has a weakness for bad boys and techno geeks, and married her own computer whiz after he proved he could keep her all her gadgets running.  When not writing, she can usually be found slathered in sunscreen trolling Los Angeles and helping top doctors build their practices.

********* GIVEAWAY *********
Kim will be awarding a variety of prizes to randomly drawn commenters during the tour and this contest is open internationally.
There are necklaces and e-books of Hands on Me, a Kim Carmichael Tote Bag, a set of vintage Harlequin romance books, as well as three pieces of Kim Carmichael Skin Care. Also, autographed cover flats will be awarded at every stop.
So!  Easy-peasy just enter your comment below and include your email address!
**Open Internationally & Don’t forget to visit the other stops on this Book Blast by going HERE to enter to win again and again! 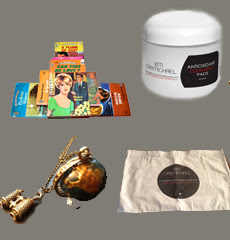 Posted by lindsey hutchison @ United By Books at 12:36 AM

This book sounds very, very interesting ;) Thank you for a chance to win any of these fabulous gifts!

Love the post! Where can I find the links to the other stops?
terri_dion@hotmail.com

Is there an inspiration behind why you chose writing?

Sounds fantastic! Thanks so much for sharing and congrats to Kim on the new release!

Beautiful book cover and very interesting description of the story.
olga_sergejeva (at) hotmail.co.uk

So many cool prizes! Can't wait to see who wins!

Hi, thank you for having me here! Here is the link for the other stops http://goddessfishpromotions.blogspot.com/2012/12/virtual-super-book-blast-eternity-by.html
Vidya - I love writing cause its something i can anywhere and I love the voices in my head.

first of all - love the cover - simply beautiful! And the premise of the story - Cupid - may be a first that I have heard or read of that one - very clever! Can't wait to read this! Adding to my tbr list!
Thank you also for the giveaway!
Erin
loveeria@gmail.com

Can't wait to read this book... Thanks for the chance.

Can't wait to read this book, it sounds really good!

Bought it! Can't wait to read it :)
Laurenalumbaugh7@gmail.com
WaAR

This book sounds very, very interesting ;) Thank you for a chance to win any of these fabulous gifts!

Thanks for the international giveaway!!

Thanks for the giveaway
Yourlilgirl79(at)gmail(dot)com