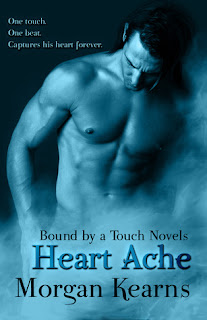 Gabrielle Ryan felt an electric attraction to her new employer the first time he reached out and shook her hand. She dreams of him, fantasizes about him, but all Nikolai wants is an assistant—and to Gabby’s chagrin, it’s not to assist him with taking off his pants!

An ache has inhabited Nikolai Voinea’s chest for the last four hundred years. Yet stubbornly resolute not to repeat his father’s mistakes, Nikolai refuses to take the one female who is his heart’s greatest desire.

When murder charges make Gabby second guess everything she knows about him, she’s hurt and angry and determined to walk away. But Nikolai’s just as determined to do everything within his power to keep her.

My Thoughts: Ever since one hand shake three years ago Niko knew he found his heartmate . Only he vowed never to be like his dad and was waiting for Gabby to come to him and admit her feelings. Gabby has had a thing for Niko from the beginning, but she is waiting for him to make a move. Since she doesn't want to be the girl who fell for the boss. Gabby doesn't believe it will ever happen and so agrees to marry another. Niko still wanting her to come to him herself is beside himself as time is running out to win her over.

I am not going to lie, there were times I wanted to pull my hair out and throw my Kindle at the wall. When it seemed both leading characters had their heads up their butts, and to save my Kindle I would shut it off and put it down, but it was as if I needed my next fix because a minute later frustrated and all I would pick it back up to resume reading. That being said means Kearn did her job as an author. She had me fully involved and feeling emotions which is what you are supposed to experience as a reader. It would be pretty boring if all you felt was oh that was nice. With Heart Ache I was on an emotional roller coaster all the way till the end and even dealing with the frustration part it was worth it. I even kept going to Kearns page writing updates. One of them where I breathed a sigh of relief went : did you hear that it's the glory glory hallelujah song because *cough* Niko*cough* finally got his head out his butt ok I might have said the word that starts with A and ends with ss.

Gabby drove me crazy because she was so clearly in love with Niko but waited for some sign or hint he may feel the same but then when it happened it was like a up and down thing where yes I love him but I'm so mad at him I wanted to be like let it go already but towards the end she changed my mind about her to I really like her. I mean she reads vampire romances what's not to like right? Ok that aside she was easy to accept what was happening and she went through some stuff with some courageously strong willpower that would break a person which also made my heart break reading it but I was so proud of how she handled it. Yes I know she is a fictional character thus it's in the beauty of Kearns writing that established my emotions .

Niko was smexy vampire who found his heartmate and I wanted to grab him and shake him a few times ok quite a bit. It's that darn honorable side of him that held him back wanting her to come to him on her own free will to admit her feeling when all I wanted was him to take what he wanted and ask questions later. When it finally did start going my way I was a happy camper.

Then when everything was right it my world of Niko and Gabby some psycho come to light because she can't face facts that she was tossed aside mind you hecka yrs ago since Niko must have the magic stick and she has obviously lost a few marbles therefore making the perfect villain not to mention she is a completely sick and twisted individual.

Kearns got my attention with this book. I loved the roller coaster I was on . I value an author that can make me feel strong emotions and she has. Plus I did not want to put the book down even if I wanted to chuck it at the characters fictional heads. I am pretty sure Stephon and Elisabeth are book two but I am kinda anxious for Vincent or Gustav  (vampire whore opposed to man whore or playboy) to have a story out like yesterday. So Kearns please hurry up and write them I am anxiously waiting here.

You can purchase it here: Amazon / B&N

You can find Morgan here : Facebook/ Twitter/ Goodreads
Posted by lindsey hutchison @ United By Books at 12:18 AM