Book Blast Tour ~ Mine To Take by Cynthia Eden With Giveaway 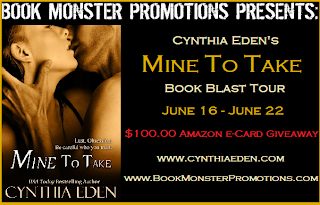 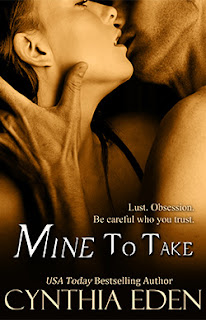 Sometimes you want someone so much…


Sometimes you need someone so much…


And love can turn into a deadly obsession.


Skye Sullivan knows that someone is watching her. Not just watching—stalking her. Months ago, Skye was involved in a dangerous car accident. The accident ended her dancing career and sent her fleeing back to Chicago. Skye is convinced that her stalker caused the crash, and she fears that he won’t stop pursuing her, not until she’s dead.


When someone breaks into her apartment in Chicago, Skye turns to the one man she believes can protect her—Trace Weston. Once, Trace was her lover. Two lost souls, they’d come together in a firestorm of need and desire. But then Trace had pushed her away. He’d joined the military, vanishing from her life. She’d put all of her emotion into dancing, and she’d tried to forget him.


Now Trace is one of the most successful men in the United States. Rich, driven, and carrying dark secrets, he agrees to help Skye. He’ll protect her from the danger that lurks in the darkness, but Trace wants more than to just be a guard for Skye.


He wants her. And he’ll take her. The years have changed him, hardened him. He’s not just a poor kid from the streets any longer. Now, he can have anything—or anyone—that he wants. And the one woman he has always wanted has just come back into his life. He won’t let her go again.


But with the threats mounting against Skye, she suspects that her stalker may be intimately close. He’s a man who knows her too well. As his attacks grow ever more dangerous, she realizes that if she trusts the wrong man, she could be making a fatal mistake.


Just how far would you go in order to possess the one person you want the most?

******** EXCERPT ********
“H-hello, Trace.”  She hated that stupid break in her voice.  Trace made her nervous. Always had.He stopped in front of her.  He stood at several inches over six feet, while she barely skimmed five feet three.  Skye tilted her head back so that she could meet his stare.


“It’s been a long time,” Trace said, the words a deep, dark rumble.  His voice went perfectly with the rock hard body and the sexy face—a voice that a woman could imagine in the darkness.


She swallowed because her throat was suddenly dry.  “Yes, it has.” Ten years and three months. Not that she’d counted.


That assessing  gaze of his slid down her body once more.  There was an awareness in his stare that she hadn’t expected. A heat that made her remember too many things.


He was close enough to touch. Close enough for her to smell the crisp, masculine scent that clung to him.


His nostrils flared, as if he were catching her scent, too.


“You look good, Skye.”  Again, that heat was in his stare. A heat that said he knew her intimately.


She wished her heartbeat would slow down.


“But you’re not here for a friendly chat, are you?” And he stepped away from her. He waved to the open chair near his desk and returned to his seat.


“We’ve never really been the friendly chat kind,” she said softly as she eased into the leather chair.


She didn’t take off her coat. She just pulled it closer to her.


A faint furrow appeared between his brows.  “No, we weren’t, were we? More the hot sex type.”


Her lips parted. He had not just said that to her.


His faint smile said that he had.


“I’m not here for that, either.”  She’d been wrecked after her last go round with Trace.


He leaned back in his chair. The leather groaned beneath him. “We’ll get to that…”


Uh, no, they wouldn’t.  She wasn’t ready to feel that burn again.


This was where she’d have to beg. Because there was no way she had enough money in her account to cover his services.  Not with the guy sporting this high rise building and looking like he’d just walked off the cover of GQ.  How things have changed. “Someone is watching me.”


He stilled.  The heat banked in his eyes as his whole expression instantly became guarded. “And what makes you so sure of that?”


“Because I can feel him.” Wait, that sounded crazy, didn’t it? When she’d gone to the cops, they’d sure looked at her as if she were crazy. You couldn’t feel a stalker. So they said. 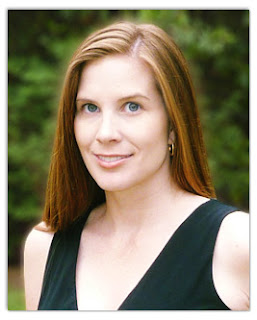 
Cynthia is a southern girl who loves horror movies, chocolate, and happy endings.  She has always wanted to write (don’t most authors say that?), and particularly enjoys creating stories about monsters–vampires, werewolves, and even the real-life monsters that populate her romantic suspense stories.


Cynthia’s foreign sales for her books include translations to Japan, Germany, Thailand, Greece, and Brazil.

I can't wait to dig in to this later today :)! Love Cynthia's work! Thank you.
vsloboda(at)gmail(dot)com

Thank you for posting the excerpt and book information for MINE TO TAKE! I hope you have a wonderful weekend.