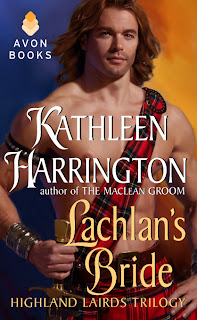 Lady Francine Walsingham, the heroine in my latest book, LACHLAN'S BRIDE, is astonished when Laird Lachlan MacRath appears at the Tudor court as the personal representative of James IV of Scotland. MacRath and his kinsmen have come to act as royal escort for Princess Margaret, the eldest daughter of Henry VII and promised bride of the Scottish king.
Francine isn't the only person staring in disbelief at the chief of clan MacRath. All the English courtiers draw back in dismay, for the Scotsman is known throughout Europe as the Sorcerer of the Seas. English sailors tell stories of how that infamous pirate conjured up fierce storms which dashed their ships against the rocks to be plundered.
Francine suspects that Lachlan MacRath is a sorcerer, who may have the power to enchant her. She remembers the stories she's heard as a child, told by her family's falcon-keeper, Fingus Mackay.
Here is an out-take, which had to be cut due to the constraints of space, which shows a scene from Francine's tenth birthday.
**********************************************************
"My father is gifting me with a falcon for my birthday," Francine told Fingus Mackay. She scrambled up on an empty wooden crate, where she perched and smiled at her family's Master of the Hawks. "I'll be ten tomorrow," she added, just in case he'd forgotten.
Fingus pushed his woolen cap up over his wrinkled forehead and ran his fingers through his grizzled hair. "Wheesht, milady," he said, "'tis a powerful responsibility for one so young. Are ye certain ye be ready for it now?"
She giggled. "Well, you are the one who told Papa I could do it."
Fingus leaned one thin shoulder against a post and eyed her thoughtfully. Not much taller than Francine, he resembled one of the gnomes he often described in his fantastical stories. "And do yer tutors know where ye be at the present moment, milady"" he chided mildly.
"We stopped for the midday meal," Francine assured the falcon-keeper. "Will you tell me another wonder tale?"
Fingus gathered up a leather glove he'd been stitching when she first came in, pulled up a second crate and sat down. "Now, let me see," he said, scratching his gray whiskers. "Since tomorrow ye'll be celebrating the day of yer birth, I'll be telling ye what happens when the heir of a Highland chief is born."
Francine smiled eager to be enlightened. "What happens?"
Fingus tipped his crate back and leaned against the wooden post behind him, as he sewed the two pieces of the hawking glove together with a thin strip of leather. "When a baby boy who's destined to be chief of a Highland clan is born, he must be watched verra closely. Verra closely, indeed."
"Why?" she asked in a whisper.
"To guard him."
"From who?"
"Why from the faeries," he replied, as though everyone should know the answer to that. He calmly plied his needle through the holes he'd punched in the leather with an awl. "There must be a nurse watching the wee babe day and night. If she falls asleep for as much as a minute, the infant will be taken."
"Taken? Where?"
"To the Other World, where the hero gods of old abide."
"Will they hurt the baby?"
Fingus shook his head. "Nay, nay. The child will be raised with great care by a wizard, who will teach him the sorcery of the ancient ones and how to become a shapeshifter. The youngster will learn the magical alphabet and the answers to all the faery riddles that have ever been told. When he returns home, he will know how to cast spells using runes and secret incantations."
Francine slid down for the wooden box and moved closer to the falcon-keeper. She spoke in a hushed tone. "I asked Father Anselm if he believed in faeries and elves and he said he wasn't sure they existed, for he'd never seen one. But he did see a witch once."
Fingus jerked his bewhiskered chin in solemn confirmation. "Oh, aye, there be witches and wizards, right enough, milady. But as for faeries and elves," he quietly pointed out, "Father Anselm has nay been to the Highlands."

I'm presently working on the third book of theHighland Lairds Trilogy, with the tentative title of KEIR'S STORY. I'm looking forward with excitement to the release of LACHLAN'S BRIDE, an Avon Impulse, on April 30th.
Thank you for inviting me to share my thoughtswith your readers. I can be found at the following places:
http://www.kathleenharringtonbooks.com
http://www.facebook.com/kathleenharringtonbooks
Twitter @kathleensbooks
http://www.avonromance.com/author/kathleen_harrington

******** GIVEAWAY ********
Kathleen is offering up one eBook of Lachlan's Bride to one lucky commenter. All you have to do is fill out the rafflecopter below to be entered.
a Rafflecopter giveaway
Posted by lindsey hutchison @ United By Books at 12:00 AM

Thanks for interest in my book, Olga. If you enjoy stories set in the Highlands, I'm sure you'll love LACHLAN'S BRIDE!

Thank you,United by Books, for featuring LACHLAN'S BRIDE on you website.

What an awesome giveaway. This book and series sound great. This is also a new author for me. Thanks for the chance to win.
christinebails at yahoo dot com

Congrats to Kathleen on the new release! Thanks for sharing :)

Love her books ! I have read all her older books and just love them !

Congratulations on the publication of your new book! Sounds like a very interesting read. Thanks for the giveaway.

I already have LACHLAN's BRIDE on my radar. This is my kind of read.

Love this, =) can´t wait for my chance to read!
Happy Saturday!
//Linda