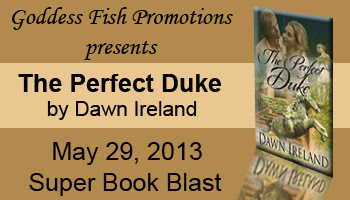 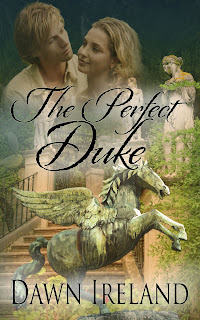 Known as The Marble Duke amongst the Ton, Garret Weston, the Duke of Kendal sets himself apart from his peers. Nothing will hinder his guilt-driven attempt to become a perfect duke.  Nothing that is, save the alluring and imaginative betrothed he’d thought dead. His intended believes-of all things-that she is a Vicar’s daughter. The “perfect” duke needs a “perfect” duchess, but how was he to discern her suitability? Employing her as a governess to his niece seemed like an ideal solution. But whose “suitability” is being tested? His betrothed refuses to see he is beyond redemption. And most grievous of all, she stirs his blood, making him forget what’s important.


Cara believes fairy tales really can come true, until she meets the unrelenting and arrogant Duke of Kendal. He looks like a Prince, but acts like a Beast. Why must he challenge her at every turn? Her greatest peril is her attraction to the vulnerable, seductive man behind the title. A match between them would be impossible. But can she show him, without losing her heart, that “perfect” is in the eye of the beholder?
Amazon
********* EXCERPT *********
Garret’s voice stopped Cara before she reached the door. “What of the cut on my chest?”


She turned back, fighting to sound normal. “It didn’t look that bad.”


He picked up the cloth, soaped it, then stalked toward her. Everything about him belied fluid grace as he handed her the fabric, a challenge in his gaze.


With as much indifference as she could muster, she dabbed at the cut on his chest.


“Harder,” he breathed, his dark velvet voice sending shivers down her spine. “You’ll not hurt me.”


She cleansed the cut, admiring the feel of the hard muscle beneath the cloth. Her fingertips extended beyond the material to caress his moisture-slicked skin. She stepped closer, until his chest was the only thing in her vision.


The rag dropped between them. Of their own volition her fingers spread, pressing her hands flat against the hard contours of his body. She began an exploration, noting the fine dusting of curling golden hair that tickled her palms as she moved them upward.


The smell of the ointment clung to him, but it couldn’t block his alluring scent, a mixture of brandy, wood, and spiciness. She inhaled deeply, savoring the heady combination as she ran one fingertip around his nipple, marveling at the pebbling on the outside edge.


Part of her brain acknowledged she shouldn’t be doing this, but she couldn’t seem to stop. 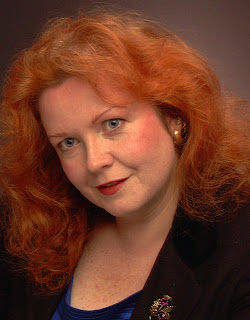 “Once Upon a Time” are four of Dawn’s favorite words. Her love of story became a love of romance when she read Georgette Heyer’s, Devil’s Cub. It inspired her to write stories with strong characters that discover love is never easy, but always worthwhile. Dawn’s written several award-winning novels set in Georgian England – an era filled with rules and intrigue. Her characters often defy “Society” as they pursue love, run away, pursue, run away – well, you get the idea.


Then again, she might write romance in order to do the research. What other profession encourages you to sit in the audience at Harlequin’s Male Model search, and take notes, or just sigh?


Dawn lives in a Victorian home in Upstate New York with her husband and very independent cats. When she’s not writing, she’s singing, gardening, learning to play the harp or wood carving. If you’d like to learn more about Dawn and her novels, go to her website at www.dawn-ireland.com
www.dawn-ireland.com
www.smpauthors.wordpress.com
******** GIVEAWAY ********
One randomly chosen commenter will receive a $20 Amazon gift card.

Please make sure you leave an email address in case you are the lucky winner. For more chances to enter you can follow the tour HERE
Posted by lindsey hutchison @ United By Books at 12:03 AM

Thank you for hosting me today! Ingeborg, I'm glad you liked the snippet and I hope you enjoy Garret and Cara's story.

Thanks for the chance to win. I love these blog hops since I meet so many new-to-me authors.
kareninnc at gmail dot com

Great excerpt. Another new author to put on the TBR Pile.
divavixenqueen(at)gmail(dot)comi