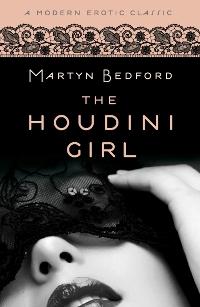 Fletcher 'Red' Brandon is a conjurer, an illusionist, a master of deception who uses his talents to seduce wild, impulsive Irish rose, Rosa, into his life with a simple sleight of hand. But when Rosa is killed, Red is pitched into a new world where betrayal, exploitation and violence are no act. The deeper Red delves into the life and death of the woman with who he shared one sexy, freewheeling year, the closer he comes to a painful realization: even the trickster can be tricked

Truth is, I tricked her into falling for me. Rosa Kelly: dark hair, blue eyes – wicked combination. And, though she could’ve had her pick, she fell for me. OK, maybe ‘tricked’ has inappropriate connotations. How about this: she wasn’t tricked so much as beguiled? Yes. Altogether more apt.

Beguiled. Comparable to ‘bewitched’, with its suggestions of sensuality and enchantment. Certainly, the illusion with which I beguiled her depended, for effect and execution, on intimacy of touch and a semblance of the supernatural. We were in a pub in Oxford, the Eagle and Child; wood panelling, nooks and crannies. We were strangers. I was with my friends, she was with hers. Someone in my group knew someone in hers and, following the complicated rearrangement of tables and chairs, there were thirteen of us seated together. An inauspicious assembly if you’re inclined to superstition, which I am not. I’d noticed Rosa even before the two parties had become one, though I made sure to give no indication of
paying her more, or less, attention than the other newcomers in our smoky, boozy alcove. The positioning of the chairs – I swear I had nothing to do with it, occupied as I was with the transfer of drinks – brought us directly opposite one another. She was smoking Marlboro and drinking Belgian lager straight from the bottle. Her eyeshadow was pale green, to match her lipstick. She wore a ring on every finger and on both thumbs.

‘Watch that one, Rosa, he’s a magician,’ said one of my friends as the introductions were completed.

Rosa, drawing deeply on a cigarette, exhaled across the table. ‘There,’ she said, ‘I’ve made him disappear in a puff of smoke.’

Everyone roared at that. Brilliant timing, impeccable delivery. I might’ve reached over and produced a cheese-and-onion crisp from behind her ear, but when you’ve just been upstaged in public the least embarrassing recourse is to play the supporting role with good grace. Besides, a crisp?

So I laughed along with the rest of them. Rosa’s voice was slightly husky, her accent a curious concoction of Irish and London; her eyes and mouth smiled in perfect synchronization, as though she enjoyed nothing more than being made to laugh. She turned to the guy on her left, asking him to pass an ashtray. They fell into conversation, her long black hair snagging now and then on his shoulder as she leaned close to hear him. Me, I drank and talked to my friends and went to the bar and to the toilet. And, with discretion, I observed her hands – all those rings, the emerald nails, the way she held her drink, lit a cigarette. She had long bony fingers and thin wrists engulfed in bracelets and friendship bands and the cuffs of a multicoloured woollen sweater several sizes too big for her. Every fresh bottle of beer, she shredded the label clean off with her thumbnail.

I have magician’s hands. By that, I don’t mean they are the perfect size or shape for my work, because such perfection of design is rare. It helps to have hands large enough to facilitate, say, the concealment of a playing card; but large hands have large fingers, less well suited to the more nimble manipulations. The trick is to adapt. Most anatomical deficiencies of the hand can, within reason, be compensated for by rigorous practice
or by appropriate props. (If you’ve got small hands, use a smaller pack of cards.) My hands are neither too large nor too small; what they are is well trained. I have taught myself dexterity and ambidexterity. A speciality in my repertoire of sleights is ‘acquitment’ – the showing of a hand as empty while actually it contains something. Done ineptly, this is known in the profession as ‘hand-washing’. Two tips: one, rehearse in front of a mirror until your movements appear entirely natural; two, never look at your hands while effecting a sleight, because the one place the audience is sure to look is where you’re looking.

Rosa’s hands weren’t magical; for all their conscious disguise of adornment and manipulation, they revealed rather than concealed. I longed to hold them. We’d all been drinking for a while when a familiar appeal issued from the hubbub of overlapping chatter. Hey, Red, show us a trick.

Even my oldest friends do this. You get used to it.

‘I’m playing the Crucible, in Sheffield, next Friday, if you want to come along.’

‘Fuck off and show us a trick.’

‘What’s this, the Illusion of the Cantankerous Git?’

After a moment or two of this, you give in. And you always involve someone else in the illusion, because they love all that. I’ll need the help of an assistant from the audience; come on, don’t be shy . . . That evening, I made eye contact across the table. Blue irises, green eyeshadow. With no perceptible alteration, Rosa’s expression said Don’t even think about it. But the enthusiastic coercion of others as they edged their chairs closer to
our table made it more awkward for her to decline than to agree.

‘Go on, then.’ Defiance. Her eyes, her tone of voice, the set of her shoulders said she was prepared to be unimpressed; nothing I could do could possibly surprise or interest her or escape her detection. And if I tried to make her appear foolish I’d fail because she didn’t give a shite what anyone thought of her, least of all me. She smiled. ‘If you’re good, I’ll let you make me a giraffe out of balloons.’

I instructed her to hold out her hands, palms downwards. She did this. I took them in mine and drew them over the centre of the table. Her skin was cool and dry. Releasing her hands, I told her to make fists. She made fists. Everyone was quiet now, watching and listening with rapt attention.

‘And there’s you guessing that, with me talking like a Kerrywoman.’

One or two people giggled.

‘Do you believe in the stigmata?’

‘That we can be marked with the sign of Christ’s suffering on the cross?’

I dipped the tip of my right middle finger into the ashtray, piled with the accumulated tappings from her own cigarettes. Displaying the silvery-grey stain at the end of the finger, I declared, ‘By rubbing this into the back of your clenched fist, I shall cause the ash to pass through the hand and appear like a stigma in the centre of your palm.’

Her eyes said Oh, yeah. I kept my face a blank of composed concentration. Placing my fingertip on the back of her right hand, I began massaging the ash gently into the pale skin with a small, circular movement. The bracelets on her wrist clicked against one another as she responded involuntarily to the pressure of my touch. All eyes were focused on the point of contact, where a charcoal smear now blemished the skin.

Rosa glanced up at me, then down again at the back of her hand.

She did as instructed. Her palm was unmarked. Silence gave way to stifled laughs, a groan, a jeer. Rosa caught my eye again, smirking slightly, and I feigned an expression of alarmed incomprehension. She was about to recline in her seat.

‘Are you left-handed?’ I asked suddenly.

‘In that case, would you unclench your left hand for me?’

It was her turn for puzzlement. Her smile became uncertain. The onlookers had fallen quiet once more, switching attention to her other fist. Rosa uncurled the fingers and, slowly, hesitantly, revolved the palm upwards. In its centre was an unmistakable dab of cigarette ash.
*****
Other Modern Erotic Classics available:
The Houdini Girl by Martyn Bedford
Lie to Me by Tamara Faith Berger
The Phallus of Osiris by Valentina Cilescu
Kiss of Death by Valentina Cilescu
The Flesh Constrained by Cleo Cordell
The Flesh Endures by Cleo Cordell
Hogg by Samuel R. Delany
The Tides of Lust by Samuel R. Delany
Sad Sister by Florence Dugas
The Ties That Bind by Vanessa Duriés
Dark Ride by Kent Harrington
3 by Julie Hilden
Neptune & Surf by Marilyn Jaye Lewis
Violent Silence by Paul Mayersberg
Homme Fatale by Paul Mayersberg
The Agency by David Meltzer
Burn by Michael Perkins
Dark Matter by Michael Perkins
Evil Companions by Michael Perkins
Beautiful Losers by Remittance Girl
Meeting the Master by Elissa Wald
Posted by lindsey hutchison @ United By Books at 9:11 PM