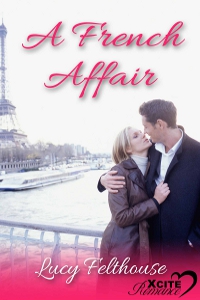 Sydney Tyler is renting a barn conversion in Northern France, planning to spend the fortnight getting some words down on her novel. Unfortunately, construction work in the other half of the building puts an end to her peace and quiet. Genuinely upset that the builders are going to disturb her, the property’s handsome English owner, Harry Bay, offers to make it up to her. He’s a little flirtatious, and after spotting his wedding ring, Sydney keeps him at arm’s length. Sexy as he is, she has no intention of getting involved with a married man. But when Sydney learns the truth about Harry, will their mutual attraction spur them on to work through their emotional baggage and make this more than just a French affair?
Available from: http://lucyfelthouse.co.uk/published-works/a-french-affair/

******** EXCERPT ********
Sydney Tyler jumped so hard that her fingers slammed down onto the laptop’s keyboard and she typed a bunch of gobbledegook.
Kashfkjsdhlfknsdlfvn sdlkch awoeduioh ahdwklc